Should we rename Decentraland DAO Facilitators Squad to DCL DAO Discord Manager (or something similar)? Discord Community Manager is more along the lines of their job responsibility. I know I have been personally confused and accidently confused them with the Decentraland Grant Support Squad.

Should we combine the responsibilities of the “Official” Decentraland Discord Server and the DCL DAO Discord Server to save funds? Paying $55 an hour for Bi-monthly meetings and creating channels for DAO grants seems like a lot of money when it could be combined with another job that already exists. Their current grant is $78k when this could be used for building the community or other features. Decentraland DAO Facilitation Squad Grant Proposal [RENEWAL]

The Decentraland Discord is managed by the Foundation while the DAO Discord is managed by the DAO Core team (DAO Committee + Squads), those are two different entities.
The facilitators uses the DAO discord as a tool, and while they manage the community, it’s not their main role, you can read more about the facilitator role responsibilities and objectives here: [DAO: QmWkGit] Hire Matimio as the DAO Facilitator 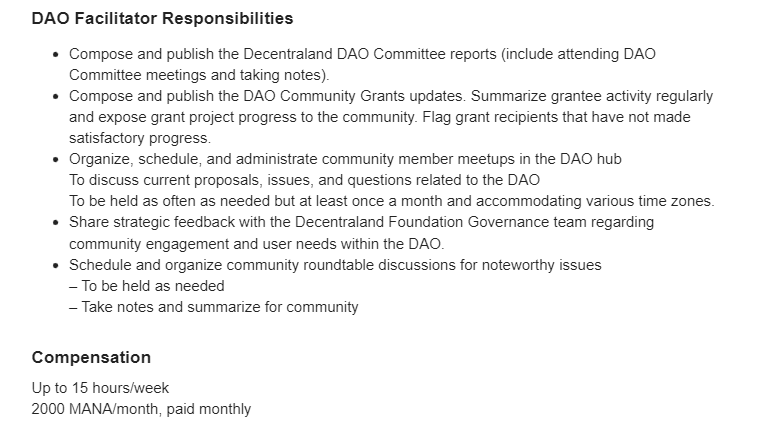 It’s quite apparent you’re harboring a certain amount of animosity to someone. But you shouldn’t launch a personal hate campaign on a whole team because of it. The DAO Facilitations team has done a remarkable job to date and the community knows it. All this unnecessary FUD is unhealthy for Decentraland.

Can I ask how this is related to the polls?

I’ve had conversations with a few DAO Facilitators, from both grants and community side, and I have heard and seen their hard work beyond just posting and monitoring a discord. It’s more than town halls, town halls are just what we see in a succinct manner, and in no way is the only view of their work. @Zino has been working on updates to show all he as 1 individual does, and its a lot. I know @fractilians is out there connecting community and interviewing grantees and helping run the newish created dao twitter. @ginoct goes above and beyond often, not just in the discord, but on the forums, and helping anyone who reaches out. There’s a bunch of other names I could list and what they’ve done, but I’ll suggest to others go find out for themselves so its not just me talking heh.

I also don’t think we should combine duties, of the discords as someone who helps run a discord server that isnt even as large of either of them individually, I think it would be too much to manage for one team.

@ckbubbles This is the reason there needs to be a distinction, you are naming some people on the Grant Support Squad. Fractilians is on the DAO Facilitator Squad. Very confusing for people. It’s important that these 2 groups are seen separately. And this is a poll, not about what they have done. It’s whether we should combine the Grant Facilitor Squad’s responsibilities with the Discord Community Manager to save on funds.

Also to avoid confusion, DAO Facilitator Squad should be renamed to DCL DAO Discord Manager or something that reflects their responsibilities better. It’s quite confusing.

Just 72 hours ago, no one mentioned these issues. But now, all of a sudden- there are issues with renaming their team and combining funds to save money? This kind of baseless FUD is toxic for Decentraland and I predict it will cause us to lose valuable leaders and potential new users. There is a fine line between offering constructive criticism and spreading harmful malinformation.

I thought it was related to the Grant Support Squad. Very confusing

I agree it can be confusing for some to know the distinction, I have also said ease of information can help with this, but I do think the names DAO Facilitators and Grant Support Squad are quite different enough.

Maybe there can be a better way to have this information laid out, easily search or navigable that doesn’t require the one looking for the info, to have to track that down like they do now in the discord or in world?