[DAO:5bc8f8f] Should we address the Voting Power Distribution in the DAO?

A Decentralized Autonomous Organization (DAO) is a type of organization run through smart contracts on a blockchain. It is governed by the rules encoded in its smart contracts and by the decisions made by its stakeholders, who are typically its members or token holders. A DAO can be used for decision-making, resource allocation, and governance of a project or community.

The Decentraland DAO was created as the governance platform for the decentralized metaverse in order to ensure its longevity and adaptability. The metaverse is a public good and its governance should be treated as such.

Decentralized governance is an ongoing and adaptable process that is not perfect, but serves as a guiding principle. It is hoped that the successes and failures of the DAO will generate knowledge for future iterations and inspire other online communities.

In 2018, the Decentraland DAO was originally run by an off-chain voting app called Agora , developed by the Decentraland Foundation. It weighed votes based on the number of contributions made by initial stakeholders, using a token voting scheme. At that time, the DAO decided to assign voting power (VP) to LAND holders .

In September 2020, the DAO moved to an on-chain smart contract using Aragon’s tools . The DAO took the form of an Agent that claimed ownership of all critical contracts and a treasury of MANA. The DAO Agent can be commanded through on-chain community voting or through a Security Advisory Board entrusted to protect the DAO in the event of a security risk .

The new Aragon scheme was more transparent and decentralized than the previous one, but it had low usage due to the fact that stakeholders had to pay Ethereum fees to cast a vote.

In May 2021, the DAO launched the current governance platform using Snapshot’s off-chain voting and empowered a DAO Committee that acts as a “trusted proxy”, enacting the results of off-chain voting on-chain.

Since then, the DAO has voted on several topics related to VP, including enabling VP delegation , assigning VP to owners of wearables L1 , and keep VP assigned to the landowner in rental contracts .

There is an ongoing conversation about the VP distribution and how a few wallets can have a significant impact on a vote. The current voting scheme has led to several issues:

This issue can be summarized as a lack of balance in the distribution of voting power, leading to a feeling of disenfranchisement among newcomers and a potential for abuse by large holders.

The following strategies offer potential solutions to address this problem and create a more fair and democratic governance process:

Strategy 1: Give VP to active contributors
This strategy aims to compensate valuable contributions to Decentraland with VP in order to create positive reinforcement for valuable actors. Some activities that could be compensated include:

Strategy 2: Community Delegates Program
Active participants with good reputations should be eligible to represent the DAO and receive a significant amount of VP delegated to them.

To maintain their role, they should vote and comment diligently on governance proposals. This strategy aims to bring a variety of viewpoints to the decision-making process and create a more informed community. A strong community should be able to prevent selfish actions by large holders.

A call for delegates was made a year ago, and this proposal should build upon that.

Strategy 3: Limit the amount of VP a single wallet can hold
This strategy aims to balance the distribution of VP by limiting the amount of VP that a single wallet can hold. For example, one vote should not weigh more than 20% of the threshold (minimum participation). This would reduce the potential for abuse by large holders and give small holders a greater impact on the voting process. It would also ensure that a single vote cannot significantly sway the outcome of a vote, promoting a more democratic governance process.

The persistent issues surrounding the VP distribution in the Decentraland DAO highlight the need for a more balanced distribution of voting power. The three proposed strategies – giving VP to active contributors, establishing a community delegates program, and limiting the amount of VP a single wallet can hold – offer potential solutions to address this problem and create a more fair and democratic governance process.

I think giving VP to the active contributors/players + limiting the amount of VP for a single wallet is the best option. Most of the residents don’t even want to vote because all the whale and friendly votes.

Something like this would be great. Since in reality should be MANA spent = VP earned. Why companies IRL are successful cuz they continue to always try to incentivize customers “the customer is always right.” Our current system is MANA bought but never spent = VP earned. It only incentivizes holding and never spending into the ecosystem. To break it down even more its like if Burger King only listened to and pivoted their business to people that buy and don’t spend the gift cards not the people buying the burgers themselves. A solution I have pondered is what about VP earned and then VP spent relative to the value of outcome of the proposal if it passes. Like kickstarter. That way there is a consistant incentive to continue to grow the business. All fun ideas all wishful but in the end doubtful that or even this will pass because it would be illogical for people that already have high VP vote Yes on something like this. No incentive to lose current VP power. Catch 22. However love these ideas and voting YES just in case.

Yes! It is great to even have this proposal whether it can pass or not! We are heading toward a more Decentralised metaverse! Also extremely fancy the idea of counting social capital into the VP system, i guess the source of

Strategy 1: Give VP to active contributors

will come from Foundation right? @yemel

Giving away VP will be gamed and opens a serious vulnerability around the oracle that assigns the VP.

Thanks for taking the initiative with this poll @yemel, I think this has been a common area of concern in a lot of discussions on discord and elsewhere.

While this idea might be a really slippery slope, it is also really interesting and the VP distribution itself can incentivize a lot of contributions in the ecosystem/DAO. I do have a couple of questions before divulging into the strategies for distribution.

Fantastic! Strategy 3 is the best choice limit a single wallet VPs. DCL could have a more fair and perfect voting mechanism. Currently,13 addresses control 42.9M VPs which is too concentrated. If these 13 addresses participate in voting, it is basically what them said! dcl is only belongs to 13 people? This draft is to prevent such things from happening and effectively pull others to actively participate! very good Again! @Yemel bring up this poll but i believed its hard to passed.
VP sources : DAO Transparency Report Dashboard 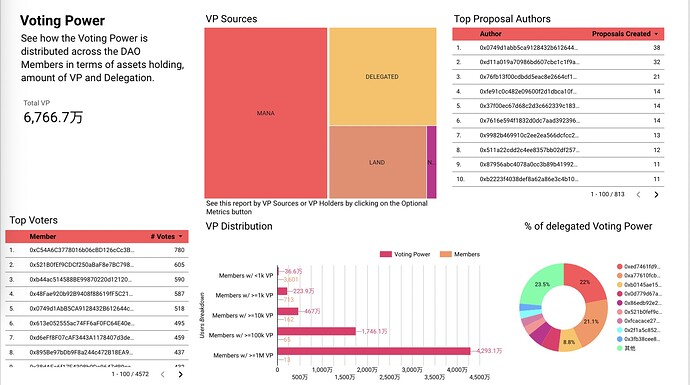 Im for a mix of what @MorrisMustang and @AaronLeupp said. Rewarding creators and giving them a voice will be vital in the future of this platform. Those who build on something with no voice on it usually lead to collapse and exit for reasons that could possibly be prevented.

Fantastic! Strategy 3 is the best choice limit a single wallet VPs. DCL could have a more fair and perfect voting mechanism. Currently,only 13 addresses control 42.9M VPs which is too concentrated. If these 13 addresses participate in voting, it is basically what them said! DCL is only belongs to 13 people? This draft is to prevent such things from happening and effectively pull others to actively participate! very good Again! thanks @yemel bring up this poll but i believed its hard to passed. its 13 13 13 people DCL!!!
VP Source:DAO Transparency Report Dashboard

I agree with the sentiment of this proposal, but Strategy 1 & 2 would reply upon a centralized entity to decide who would get VP delegation which could be abused. Also, the amount of VP being delegated out to members would have to be limited and strictly monitored - does this really solve anything? One user will always have more than the rest… (not collectively)

Strategy 3 is interesting and imo the best of the 3. However, limiting the VP of a user because they are ‘too’ invested doesn’t seem fair.

Strategy 3 also rely on the goodwill of the user. Someone could for example split their large MANA stack into countless of 100k VP accounts, rendering that strategy useless.

Voting yes on this Pre Proposal Poll. I think it’s clear this is necessary, and we should have more structured community discussions surrounding solutions.

Thank you for your work in putting this together @yemel. Option #1 is too hackable in too many ways and I agree with HP that #3 can easily be bypassed. Is there not enough activity around option #2 to level the playing field even a little? Could this program be given more clout and expanded to have more impact?

Right now VP is tied to some form of asset right?, wearable, land, name, that can be sold or traded for value. If we give VP based on participation, what will this VP be tied to?
Large VP holders also have a large financial stake in DCL, I’m not sure giving VP just for the sake of equity is the solution as it will not have the same value. I would rather find solutions to put more MANA or LAND in the hands of creators, contributors and players, then they can do with their VP as they wish. VP inequity is directly tied to assets and access to resources. I am interested in buying land, stacking MANA and such, but there is little avenues for me to do that in this space. Perhaps a way to better incentivise participation in the DAO and in-world is to incentivise projects that allow contributors and players to earn using their own skills to build DCL in various ways. I think the open bidding program, and the DCL Curations Library are good examples of such incentives. MANA not burned when creating names could go back to the DAO to fund these initiatives… just my wheels turning on the whole equity issue.

I vote yes because I agree there is sentiment and would like to continue the conversation.

I think owning a purchased wearable itself should provide VP. That would encourage more purchases IMO. Not sure if it could be distinguished between purchased or earned though. But spent Mana should account for something as well. Not swapped but used to by a name or wearable or land or whatever else may come into play. Would love to see more things for sale in Mana. NFT marketplace. I’m getting off topic now. LOL. Ill vote yes for the change. I don’t agree there should be a required amount of VP to vote.

Should we address the Voting Power Distribution in the DAO?

This proposal is now in status: FINISHED.

Should we address the Voting Power Distribution in the DAO?