[DAO:f461ba6] Should the DAO restrict the ability for members with less than a certain amount of VP to vote on proposals?

This proposal aims to improve the accuracy of the voting count by restricting the ability of members with less than a certain amount of Voting Power (VP) to vote on proposals. VP is a measure of a member’s level of commitment and engagement with the Decentraland and the DAO and for now, it is calculated based on the number of tokens (MANA, LAND, ESTATES, or NAMES) or the amount of Delegated VP that wallet has.

By restricting voting to members with more than a certain amount of VP, the proposal would ensure that only committed and engaged members have a say in the decision-making process. This would help to reduce the influence of bots and other entities that may have a minimal interest or stake in the DAO and only vote to farm a potential airdrop. Additionally, it would encourage members to take an active role in the organization and align their interests with the organization’s interest.

This proposal suggests that the voting mechanism would be modified to check for a member’s Voting Power, and if it is less than a certain amount, it would not allow the member to vote on a proposal.

Note: The amount of VP will be proposed on the Draft proposal, but I would love to see the community discuss in the comments section how much that amount should be.

Voting NO
I think one advantage of DAOs over traditional organizations is that even the smallest investor can participate in the governance procedure.
I think the participation problem is more of a UI issue, and we can change the UI to count only users with some minimum amount of VP, and having to click a “show small VP votes” to see all voters.
I don’t think that either the bots, or real users with low VP affect the procedure negatively in any other way.

I do not think restricting the votes is a good idea.
We could have an option (on a user preference basis) to filter the votes with less than X VP though.
I’m not a big fan of all the 1 MANA votes, but they should still have the right to vote.

Based on comments above:

Maybe there is a way that the VP gets counted, but it doesn’t get counted as a unique vote toward the # of votes in favor or the total percentage, unless it’s over say 5 or 10?

Absolutely not! No reason needed!

Wow bro restrict the ability of members to vote. If this isnt some we are better then you plebs type aristocracy bs. Wonder if these people would been nazis in ww2 ow Slave traders back in the day. Remember kids the small man doesnt matter take your small one vp or no vp voice and kick rocks. … Im ashamed to see some the names tied to this. Disgusting and repuslive to the very idea of a dao. Lets just make this centralized for the rich and founders and cut out everyone without 150k vp. Bam now you have the only people who seem to think they matter.

I think is should be remembered that the ethos of distributed ledger technology is based on decentralization. Considering that the ethos is captured in the name of Decentraland itself, a concentration of voting power is philosophically inconsistent with what a distributed blockchain based property system represents.

Thank you very much.

TLDR: Autovoters appear to be everywhere but I don’t think their votes are invalid in the system we have. Perhaps we tag accounts with bot like activity and make them do captchas.

I don’t think voting should be restricted just for having low VP but I totally understand where you’re coming from with this prop. Automated voting (and bots in world) is a problem which I’m certain is skewing voter/player data and I agree it should be considered as we restructure the DAO.

There is no way to be sure these wallets are bots but they all share commonalities that paint a pretty clear picture. All suspected autovoters on my list have less than 10 VP, all vote regularly and frequently in at least 5 snapshot DAOs (usually more), the majority of them vote “yes” or the first vote option on proposals, and 7/8 of them have never logged in to decentraland. Essentially, as Gino says they are likely farm voting multiple DAOs in hope of airdrops/rewards.

Instead of restricting voting, maybe we could develop a system of identifying bot like activity as best we can, tag these wallets as “bot likely,” and then sort tagged wallets out of voter data. If they are bots they won’t complain about the tag, if they aren’t bots, they will prove human activity by asking for the tag to be removed. Perhaps tagged wallets have to fill out a captcha or visit a specific parcel in world or something to remove the tag?

Some (imperfect) ways I’ve been using to try to identify likely autovoters are:

I think this data does highlight a flaw in our voting system but as long as we are using the investment = VP system these votes are valid, just as whale votes are still completely legal and valid. 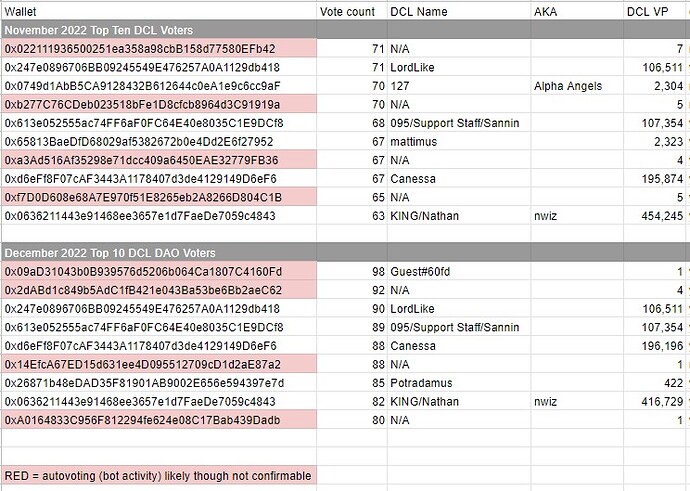 Every member should be counted as a member, we can’t restrict a member just because he/she has low VP.Everyone has the right to vote for his/her voice. We can’t mute them, as the ecosystem needs everyone to participate and every member has the power to bring more active user.

The most important things that dcl need is get Flow users.

100% agree with @ile here - the goal here is to ensure some kind of involvement with the DCL ecosystem, not to be elitist, and this seems like a good way to start in that direction.

This proposal is flawed on both ends. Or even three of them:

OK, pls don’t kick me, it just seemed so funny in the context of this proposal: 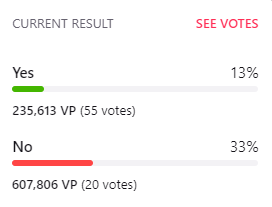 Of the 55 yes votes at the time of this comment 49 of them have less than 10 VP. Do you think they even read this post or realize how it will affect them? I’d bet mana that 95% of those 49 yes votes are vote farmers who couldn’t care less about the dcl dao.

I think a number of you (not all) are missing the point here. This proposal isn’t talking about cutting legitimate voters who have low VP but rather preventing bots from spam voting for whatever intentions they have.

It would be akin to asking yourself, are you ok with spam bot voters voting in your general elections by just possessing 1-5 mana?

I think this only proves how flawed the whole idea of VP criteria is.

I mean, it’s not statistical, but I personally know a person who owns 60+ LANDS in DCL and couldn’t care less about their VPs, DAO and all that.
Let us remember that most people who got into crypto in the first place, were interested in speculation more than development.

I do realise that my insights are 50% hunch 50% intuition - that there are bots, and some higher maths issues involved.
I’m only highlighting the “safe vs. stove” dilemma.
Safe = static, SOV, hodl, “security”
Stove = dynamic, engine, fuel burning, “commodity”

People brought up the issue of more people voting for things and whales voting opposite to offset the vote showing majority vp holders vote against the greater community. This is the real reason for this. The people made this so apparent that those with larger vp then with their spiteful pride hurt egos started to create multiple ids and vote 0 to show and make it seem like the old proposals where the numbers where like that were invalid. That this system is flawed. In reality it wasnt at first because it wasnt botted. It is only now a issue because it invalidated the saying of one side was more for against because the root problem has always been we cant counter bots. There is however ways to track ips. We have constant pricks on this platform that try to play little annoying childish games to play the system and create problems one after another to hinder this dao. People who claim to be for the platform and greater good but instead create antics like the above i stated. Wether that is lowkey smart because it makes us go through these issues or dumb because it highlights one flaw after another causing us to slow progress and innovation is up to the users here to decide. Either way the people will need to decide this and i feel silencing zero votes is a mistake creating any threshold for voting or commenting on proposals is in direct correlation to a dao. If this is how decentraland wants to counter things ill agree with you @jar0d but the people proposing this can move more then one mana vp to those wallets and can easily set us on a path were the bar needs to be kept raising higher. A never ending f f game that leads to classism in this dao.

won’t forcing people to move a small fraction of mana into the wallet make it easier to track who is doing it?